Short review of a work by Russian artist Olia Lialina, written for a special work in her online art gallery. 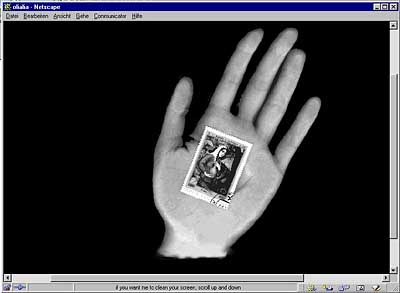 Olia Lialina is a very intriguing net.artist. She is dealing with an artistic practice which is classical in the sense of both its connection to a historical context as well as its deep roots in the fertile soil of a relatively young but thoroughly rich internet. We see a century of media art, with a focus on film and of course internet, in works that reflect the layers of narrative and interpretation of the world seen through these media. What is fascinating is that this reflection then replaces all other possible views. This talent, to mark history with a radical personal statement which is so strong in its poetic and at the same time analytic qualities that it becomes a truth, is what distinguishes good art from its mere decorative brothers and sisters. Olia Lialina herself is a diva, a heroin like we know them from movies that became icons of their era. Her incessant involvement in and dedication to the development of a new language of our virtual time make her indispensible in net.art-historical studies, with her artworks as well as with her writings and analyses.

A rare example of an Olia Lialina work that has remained rather unknown is 'Clean your screen' (olia: I forgot the title, and have no good computer to go online now, can you correct me please?). Lialina has over the years become a specialist in simple, effective, yet emotionally complex net.art works, next to browsercrashing masterpieces like for instance her 'Great Gatsby'. This sensitive complexity is a philosophical and psychological depth as experienced in life within the networks, life dominated by the internet and life as seen and lived through the computer and modem. The worldwideweb is mostly an expanding shoppingmall where culture is mediocre or on the brink of being accepted (let alone respected) or ditched. With a thin and rather stiff hand Olia Lialina reaches out to you from the dark and gently offers to clean your screen. The awkward sensation that overwhelms one when seeing this seemingly single hand move up and down or left and right over the surface of a computerscreen, while it appearantly wipes it with a stamp, is a mixture of amusement, being spooked and pity for this fragile hand and its tiny cleansing tool. The stamp is clearly Russian and made me suspect it might have a message, as stamps usually 'carry' messages. In this case however the message is overtly obscure and left to the viewers cognitive preferences, or should I say: the workings of his or her mind. It could signify the location of the hand or the server it is on. It could insinuate a superiority of Russian or more precise Olia Lialina's net.art works. I might remind us of some physical roots we still have in this world, as the stamp represents the postal system of postmen, cargo trains, boats and airplanes while the image on the stamp (a woman in traditional clothing) represents history, tradition and countrylife. Olia Lialina will never tell us, but she will continue cleaning our screen.