In March I went to see My Boyfriend Came Back From The War at MU Gallery, Eindhoven. I wrote a review, which I then left on the shelf for too long, because I got distracted. It is worth publishing though, because writing it forced me to think about the very turbulent nineties and their aftermath again. It made me mull over how art on the Internet has evolved and specifically on how individual works live on and gain new meanings many years later. In some ways seeing this exhibition was like meeting an old friend and, though still feeling the love, having to find your place in its new life. 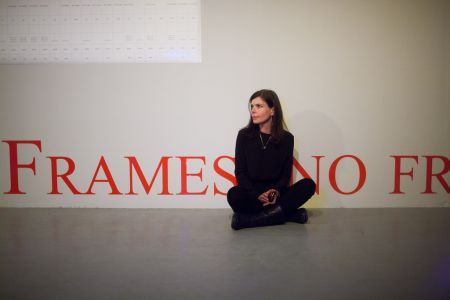 Review of My Boyfriend Came Back From The War at MU

We can stop debating whether it is necessary to present net art in a physical gallery space. It is. Olia Lialina's exhibition My Boyfriend Came Back From The War is the final proof it needs to be done. The last few weeks (and even years) have been full of discussions about the presentation and conservation of digital art and culture. Lialina's exhibition in MU, Eindhoven, co-organized by Annet Dekker and running parallel to a similar exhibition at HEK in Basel, brought to light the benefit of the specific attention a gallery space or museum can offer to classic works of digital art of any kind: networked or standalone.

My Boyfriend Came Back From the War (or MBCBFTW, an abbreviation used by the gallery) (1996) is one of the most influential net art pieces of the mid nineties. It is a black and white browser specific work in which the artist experiments with the construction of narrative by creating interactive, semi-overlapping cinema-like scenes in browser window dividing frames. Lialina, a former film critic, was looking for a way to make Internet film. She refused to reach for digital video formats, but tried to create an Internet specific cinema instead.

The storyline of MBCBFTW hit a nerve at the time of release. It tells about the pain of a girl who cannot reach her war veteran boyfriend, even though he is right there in the room with her. In post-Afghanistan war Russia the work brought many to tears. Olia Lialina received emails from numerous viewers, from within and outside of Russia. Various artists were inspired by the work over the years. The universal nature of the story makes the work still speak to audiences twenty years later. The exhibition at MU showed the original work and fifteen derivative pieces, interpretations and homages.

Upon entry the first work in the exhibition is, of course, the original version. It is accompanied by another version of the work, the one that was bought by the online magazine Telepolis, making MBCBFTW the first Web art work to ever be sold. It is exactly the same as the original version but for the url in the address bar of the browser. For Lialina this makes the work in the collection of Telepolis a new original.

Both are displayed on old monitors on a glass table. This approach is continued with the first works in the exhibition. The glass table is to display the cables and routers below the table. It is to disclose the full scope of the hardware involved. It is a feature that is easily missed by an audience focusing on the screens.

Those screens tell a story by themselves. They have been carefully collected by Lialina to enable an experience of the work close to its original context. To further heighten this experience Lialina also slowed down the Internet connection. This is still not as slow as it was in the mid nineties, but rather than an instant clicking from link to link, racing through the story without pausing, it takes a few seconds before each next image or text loads.

This interference in the download speed may seem like a small feat, Internet nostalgia even maybe, yet part of the original work's charm is exactly the build up of suspense between scenes. The delay is essential. Each new slowly loading element emphasizes the tension and silence between the estranged lovers in the story. With fast Internet connections quickly encroaching on many parts of the world it takes a trip to an exhibition like this to experience this aspect alone. 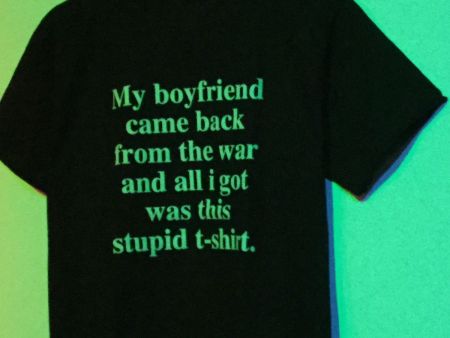 Mark Wirblich, My Boyfriend Came Back From the War, 2005

What an exhibition like this can also disclose is the way net art is embedded within an Internet community. Olia Lialina's exhibition at MU not only celebrates the 20th birthday of her iconic work My Boyfriend Came Back From The War. It also celebrates Internet culture, in particular the way social and creative relations between artists have proliferated online. The exhibition presents thirteen works by other artists, all of them inspired by MBCBFTW. Some stay very close to the original, either replacing the content of the framework Lialina built by a new story, or transferring the storyline to a new context, like that of Twitter. The strongest works move away more radically from Lialina's MBCBFTW. Some almost literally knock out the original. 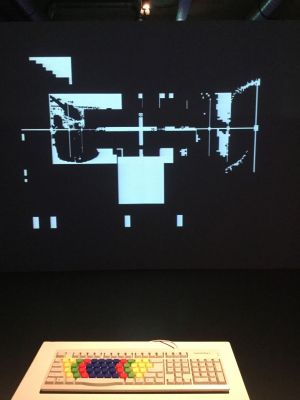 Jodi's MB, an adaptation of their famous adaptation of the Wolfenstein game SOD, let's you shoot at elements of MBCBFTW. Images from Lialina's celebrated work float in the 3D game space Jodi have deconstructed. Because Jodi's SOD is also black and white the mix works perfectly. The strange, easily jerky movement of objects within the 3D environment is reminiscent of the jump between frames in MBCBFTW. Combined with the sound effects of the original Wolfenstein game (shooting, shouting, dogs barking, metal doors sliding hard) the trauma of the boyfriend in the original story becomes almost tangible. 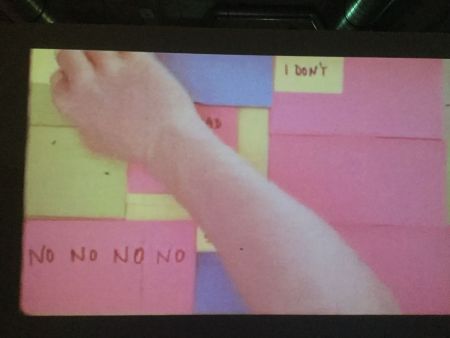 A completely different approach can be found in Freya Birren's M.B.C.B.F.T.W. (Redux, At Rest). Freya Birren is the pseudonym of the British artist Jennifer Walshe, who likens MBCBFTW to a musical composition. Walshe compares the large frames to a baseline and the smaller frames to a melody. She recreates Lialina's MBCBFTW through a close-up video of a hand arranging multicolored post-it notes on a wall. The notes contain the story of a woman whose husband comes back from the war in Irak. The pieces of paper stacking up also suggest an endless succession of wars, war veterans and war traumas. The pink, yellow and baby blue post-it notes seem at odds with the tragic story they tell.

The most conceptual work in the exhibition is that of Constant Dullaart. His War.capital but u can't take the war out of ur bf consisted (in the exhibition) of a link chain of black websites, but since then the artist has replaced the black screens with a .gif of the hand of a traumatized world war one veteran. Like in some of Olia Lialina's other well-known works (Agatha Appears, Summer) the essence of this work is visible through the activity in the address bar. The browser jumps nervously from war domain to war domain. Dullaart bought 23 domain names, all starting with war, but ending with .bingo, .bargains, .legal or .capital. In the exhibition (black) version at one of the domains the first sentences of the original work pop up, just for a second: "My boyfriend came back from the war. After dinner they left us alone." In the sea of blackness that surrounds it the message sounds ominous. The choice of domain name extensions make Dullaart's submission one of the more cynical works in the exhibition. 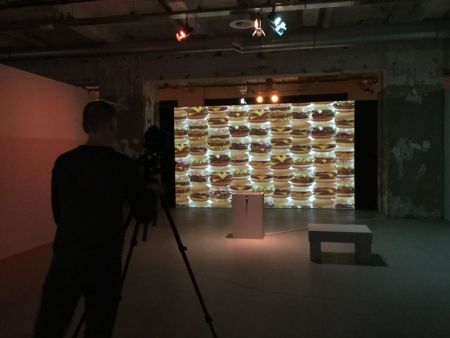 MU's photographer still working at the opening, Guthrie Lonergan's Burgers (My Burger Came Back From The War) (2012) in the background.

The works I highlight are all presented on large screens rather than on vintage hardware. For me this was the way the original impression of the work survived best. The exhibition may proof the value of showing works like this in a gallery setting, but it could have been stronger. Olia Lialina continues her experimentation with form and function in exhibition design by including hardware and software from 1996. She even engages with the current debate about the preservation of digital art by presenting a large poster in which each step in MBCBFTW is logged and explained to ease future reconstruction. Though these things are interesting in themselves they distract from what was most important for me, namely the recollection and representation of a powerful classic net art work, more specifically its feel. That said, there is no doubt that Lialina is still one of the frontrunners in the research of early Web art and Internet culture.

We are only at the beginning of an exploration and representation of early Internet art. Olia Lialina's exhibition around the twentieth anniversary of My Boyfriend Came Back From The War shows how valuable it is to revisit and even physically exhibit historical work. Not only does it bring this work to a larger audience, many of which have only been online since about ten years or less, exhibitions such as Lialina's help diversify and strengthen the approach of digital art in gallery settings. Most of all though they bring valuable art to the forefront.