This short interview is part of a small set of interviews I did for a semi-ironic text about net art in the home called 'The Interior of Net Art,' which is also on this site. The goal of the interview is to find out how artists working with the Internet think their work could be exhibited in physical space, and also whether they think it could be sold. These questions have been hovering around net art from the mid-nineties. The artists and art examples in 'The Interior of Net Art' show a great variety of apporaches and opinions.

The grammar and spelling errors in this interview are not accidental, but part of Peppermint's writing style at the time. 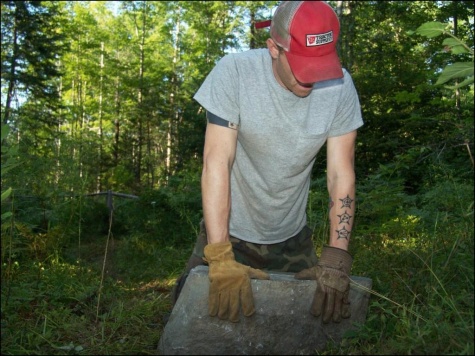 JB: How do you feel about physical exhibitions of net art in general?

Peppermint: at this point i believe the internet is an "effective medium" for art more often when it is NOT considered a medium at all but more of a phenomenon. the success of my work relies on my insistence of the impossibility of ever producing "meaning" or rather a simple value sign i.e., one or zero, a yes or a no. the danger of the word "interaction" is that it currently results in a binaristic and inescapable stronghold and is a word overly-associated with the attempts to identify or herald the redemptive powers of the internet or net art. i feel close to "net art" when i imagine the internet more as a collective "falling apart"(restless). if this is a falling into the "idea" of the internet instead of the "internet itself" and this "idea" assumes physical manifestations then all the better. these days i am thinking the most "sincere" way to approach the internet and net art is attempt to get at most specifically "what the internet does" and one thing it does is "accelerate the dissemination of information". the net artist's allowance of the many forms their information takes and the net artist's admission that the "success" of their work might be only in that "it did take forms", attain movement and dwell beyond its initializing sequence(life).

JB: How do you see the exhibition of your work: does it for example act as a simple representation of what you make, does it 'extend' the work in some way, does it change the work or are there other effects I don't mention?

Peppermint: maybe in the first question i have skirted this...

JB: What is the ideal way to you to exhibit your work in a physical exhibition?

Peppermint: for me to exhibit work in a physical exhibition is at this point is entirely dependent on if the physical work is informed by "the idea of the internet." my work has always "networked" into and around both the physical and the internet. this is integral to my continuing discourse around the word *"exposure." the word "exposure" continues to reveal itself on a multitude of levels and helps me to understand the ways net art can present itself as a "coherent", "sensible" almost dependable instance within the network though only in intermittent bursts or "packets." these are fleeting moments where "something" congeals and reveals an otherwise expansive "nothingness" of data with cloudy origins, data without destination.

and so... net art it can take the form of photos, video, homemade psycho-active drugs (yes it has recently:) or a laptop alone in a cornfield attempting communication with chickens. getting back to the specifics of the question, the ideal way to exhibit in the physical is for the net artist not to simply convert the work into physical components, but instead to allow the work to "network" itself (as a life form of sorts) into recombinate autonomous nodes that act as carriers of the initial information.

*note: i first encountered the word exposure as simple analogy to the photographic plate and as related to paul virilio's aesthetics of disappearance

JB: If you were asked to make some kind of experimental set up to exhibit your work in, what kind of thing could we expect?

Peppermint: a space unlike a typical white-walled gallery and instead permissive and capable of encouraging destruction or maybe just encouraging the imagination of destruction. .... sorry i saved this one for last and it is late here:)

JB: What would your ideal exhibition catalogue look like?

Peppermint: it would model itself on the exaggerated forms of the commercial and commercial advertising i.e., it would seek simulate the excess of capital and appear in numerous languages, mediums and formats, e.g. print, net, cd, video etc. the important difference is that unlike the mass proliferation of advertising texts immediate, "unpublished" & forgettable these exhibition catalogues would be an "overexposure" for the exclusive purpose of public archive and this would possibly encourage their awkward availability for future exposures research.

JB: Do you think it is necessary to approach the audience of a physical exhibition in a different way then an online audience? If yes, what is the difference? (This question relates to your work, and not to net art in general)