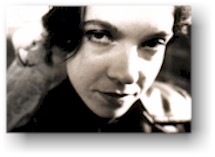 Mary-Anne Breeze, better known as Mez, lives and works in Australia. She first got into a larger net.art picture in 1997, via the net.art mailinglist 7-11. Her work is highly 'textual', but expands to for instance sound as well. Considering the relationship between concrete poetry and music or sound this probably should come as no surprise. She likes to change her name a lot (mz post modemism, mezchine, ms Tech.no.whore, flesque, e-mauler, and mezflesque.exe), and maybe because of this, plus the nature of her work, she has a less clearly demarcated position then some other net.artists. This relative 'instability', compared to some highly compact web artworks, is one of the attractive sides of her work for me. JB: How would you describe the kind of net art you make? Mez: Hard question this one, basically because of the immediate temptation to launch into my trademark writing style/language; that is to 'mezangelle'. This style of writing/textual construction [that has at its base email dialogues and network exchanges] underpins all my net.artwork, even the more image intensive versions. The format evolved from a series of emailed collaborative pieces carried out with m@ [Matt Hoessli from the CADRE Institute] on the 7-11 mailing list from '96 onwards. At the time, I was into switching avatarian cloaks [the most regular being 'ms post modemism'] which is another defining criteria of my net.artwork. My particular 'angle' was to take the information text tracts m@ would post and 'mangle' them through free/multi-word associative techniques and repost them - hence the term, mezangelle. This technique has developed since, with computer code conventions and regular chat/email iconographs contributing to its formulation.

If I were to answer the above question in my 'mezangelle' style:

Translated, this mezangelled tract would read:

In/using one word, I'd describe the kind of net.artwork I make as 'mezangelled'. In/using one sentence, I'd describe it as a conflagration between image, text and sound + a fragmentation [allusion of frottage as well here] of breath, electronics and flesh. Extended, the description would be that I make several versions of networked art, each one particular to my conceptual intent, which is imbedded within units/phonetic snippets [hence, the audience/'you' actively knit the units/ connections together]. The labels and categories that are applied [or 'word shrink-wrapped'] to my artwork/stuff always seem somehow inadequate.

The mezangelle phonetic/text-assemblage focus is what creates my 'style'; this overlaps into my more image-oriented work in the use of multiple gif images [and lately, Flash technology]. In several of my works I employ units of repeated animated images, in order to create a 'cloning' aesthetic - the unit is the important visual key, and is repeated infinitely [to create data echoes, resonances]. Also, my emphasis on collaborative efforts include a breaking down of dialogical traditions, of shifting the units of information and communication from the usual and expected to the cryptic*it's about active layering, and encouraging varied interpretation.

JB: Could I say you have a preoccupation with language and poetry?

Mez: You could, though I'm not quite sure how accurate this is... outwardly, my work has all the habitual signs of a language preoccupation, and who knows, language is probably my narcotic. It's hard for me to judge, in that if I actively and consciously recognize the nature of my net.artwork practice and the mechanisms I employ whilst I'm creating, then I'm likely to produce stilted, predicable work. I think this may also be the case for [some] other net.artists. Regarding poetry, it's a label I'm uncomfortable with. Some of my textual work verges on orthodox poetry boundaries in that I use succinct emotive phrases/words etc; however, I like to think that my work bypasses these regular formats of traditional writing, through their network dependency if nothing else.

JB: Can you maybe explain to us humble ordinary prose writers what drives some net artists and net rebels to write in ascii poetry, near grafiti style?

Mez: 'Humble ordinary prose writers'? What the hell are they?? [just joking]. I'm not sure if I can speak for other net.artists but I think the drive to create differing modes of textual production [including ascii] stems from utilizing the basic building blocks of a networked medium. For example, my text tracts are influenced by the jargon and developing conventions that pepper various mailing lists, IRC chat channels, and multiplayer games. I think the use of these styles is a reflection of the informatic culture that exists on/in the network itself.

JB: Do you see a difference between 'new' and 'old' net artists, or (a tricky question) between female and male artists?

Mez: I don't think the distinction between 'new' and 'old'/female and male net.artists should be an issue. Having said that, of course I'm not naive enough to actually believe that categorization isn't an issue in this PPP [Proto-Post-Potential] utopia we call the [inter]net.work. One of the things I used to cherish about the net was its ability to promote ambiguity through the ideas of extended ownership and indistinct authorship. I'm not sure if these ideals still exist, with net.artists having to retract into distinctly smaller niches within corporate/mainstreaming informatic spaces, almost being compelled to stake out an regulation authored space as they go. I think the distinction between masculine and feminine oriented net.art maybe more useful, in that it describes a perspective that is specific towards the work itself, rather than placing the emphasis on the creator.

JB: Do you make special use of mailinglists and email?

Mez: Can I just answer a resounding 'yes' to this? [joking] This aspect of network communication has actually made my net.art possible; from volleying mezangelled mails back and forth with collaborators, to using the variations in my signature file as a narrative slogan venue [see my latest sig file with the 1st instalment/springboard text: 'luv yr [net]wurk'], to indulging in rampant word play and banter that later may enter into a fict/faction piece*it all adds up.

JB: Is making art your first occupation, or is it an addition to other work?

Mez: Constructing/channeling the necessary play/exploration involved in creating net.art is what I do. My 'other work' [arts journalism and critiquing] is carried out purely in order to feed, house and supply the biomezchanics, though I do kinda grudgingly enjoy it. As yet, my projects have yet to be funded [aka acceptably rubber stamped] via the Australian arts grant circuit so this makes my 'paid work' a necessary evil. I suppose my preference for blurring my identity via avatarian constructs makes this difficult, in that I'm yet to establish a persona that has concrete/identifiable markers required by most of the relevant funding bodies. As yet, my net.artwork commissions have come largely from overseas organizations.

JB: Did you study at any art school? What is your background?

Mez: I've studied extensively [possibly too much] though not in the accepted academic hierarchical sense *I've swapped my learning-curve emphasis around, and have degrees in both Applied Social Science [Psychology], Creative Writing, and a diploma in Fine Arts. My professional arts career was kicked-started as a hybrid writer/painter, though I was never satisfied with the medium[s] and my work was embraced within the umbrella-label 'installation'*I had the urge to use the notion of scientific order to mask/covertly highlight another type of 'random' order, the irrational, the 'feminine' undertow *this lead to the computer, to play & integration [play is absolutely crucial to my work, if I don't allow myself the time to absorb and digest and information-trawl, I'm lost].

JB: What should good net art contain in your opinion?

Mez: I think it's probably easier to give my opinion on what 'bad' [or non-engaging] net.art is, and just work backwards. Work that puts the latest software/technique first [at the expense of the overall aesthetic/conceptual impact] or that panders to the established art market/bandwagon whilst making little effort to explore the medium [graphic designed made-to-order net.'art'] just doesn't grab me. Net.art that utilizes the very grain and grit of the network, that stretches preconceived artistic notions, that makes me unsure of the very principles that govern the interface/project, that throws a reliance on hackneyed dataface terminology out the window and creates its own, that blasts open my intellect and sensory faculties is what it should be all about.