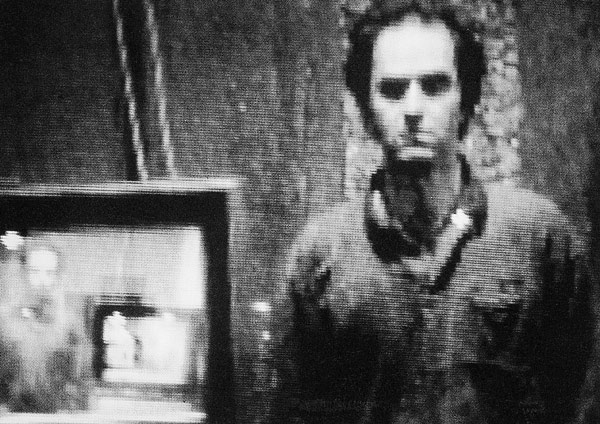 Sound artist Ron Kuivila was in a panel at V2 during the Rotterdam Film Festival in 2000, the other speakers being David Blair (Wax Web) and Martin Berghammer (specialist in games). He had the idea to have a net arts notation festival, and would very much like to see it realised. Somehow in the edit he himself made of the interview (I let people do it together with me usually) an interesting aspect of this was lost, namely that it would be very good to also look at which notations would/do -not- get realised and why. Notation/realisation has a long history in performance and music, and a slightly younger one in the visual arts.

JB: Why were you asked to speak at V2 in the context of storyboards in interactive media?

Ron Kuivila: It arose out of an email exchange I had with Andreas Broeckman where I proposed the following line of reasoning: The acceleration of development in digital media has also increased their ephemerality. This becomes a fundamental creative problem for artists trying to engage the possibilities of a particular technology as a 'medium'. By the time you have mastered it, it has gone away. For example, you may put enormous amounts of energy, creativity and invention (as many did) into making a CD-Rom, and then discover a year later, that it is close to unviewable because the technical performance is not at the next achieved level - it has slipped behind. What I am interested in is raising the possibility and asking the question: what if we look at that seriously and begin to think of the creation of media work along the relationship of notation/realisation.

Individuals simply cannot keep up with the enormous investments being made to speed things up, make them slicker, and in various other ways make the next media form sufficiently attractive to make it difficult to even look at its predecessor. In this context making art works with these media becomes a bit like to a performance. What happens if we take that observation seriously and imagine all art making with media as having the ephemerality of performance? At the moment, the best alternative I can imagine arises from the artistic and social relationships that grow out of notation and realisation. I mean notation in a 'prescriptive' sense that sets ground rules for a complementary activity - realization - rather than in a 'descriptive' sense that specifies a work fixed in every detail.

In the last year there has been a lot of interest in 'open source' software. The basic model evolved from the communication possibilities of the net, and the tradition of agonistic adolescent male display associated with computer programming. People discovered that you could create much better software by allowing the source code to be freely distributed and inviting people to improve it. Only half ironically I want to claim that prescriptive notation is the original open source. Or, at least, that I am using the term notation in a way closely related to the ideas of open source software. And to some extent, new media are themselves notations. Consider: one works with a new tool such as html or whatever. It constitutes a meta-score of some sort, because it creates a field of play. We are very comfortable saying: "No, it is just enabling technology. We can distinguish that very clearly from the work." Perhaps we shouldn't. We could imagine the passage between a particular set of technical possibilities to a particular piece as a more fluid situation. Or, we can take the opposite tack and imagine works as problems of specification. Making a work then becomes a matter of making a notation that exists independent of any specific technical possibility and that can be re-constituted by adding the water of a current technology. So, you see I am raising the possibilities to the notation/realisation almost in self-defense against the boundless energy and invention of these technical forms.

JB: You bring art in networks close to performance, even if the initial idea behind a work is not performance like we have come to understand the term "performance". Is any recording or archiving (which recording in 'databanks' like the net becomes) by an artist a performance in this respect?

RK: Not quite. What I was saying was that any time you go about trying to make a work, the media used are morphing under your very fingertips. This can make it seem like any work you make is really a performance because it only has a momentary existence. The databanks themselves are ephemeral. They will enjoy a continued existence only if someone maintains them. There is a disciplinary element to that. Maintaining is not making. Eventually you start to loose the race, and you get more tightly leashed to the 'common wisdom' because you don't have time to explore the alternatives. And then you think, "oh my god, I've been left behind". Part of my initial search of individual websites was that they are a little bit like cave drawings. They are a way of marking your own presence in a site that one was not completely familiar with and a little bit afraid of. The notation/realisation axis can exist a little bit independent from that. Not totally independent, but it offers some resistance that provides an alternative channel for imagining yourself and what you do, while at the same time making it possible to be engaged directly with the media.

RK: It is a very complicated question. In a way what you have to do is go and ask yourself about different kinds of work that existed as notations. We can look at two opposite extremes: Sol LeWitt's wall drawings, where it does not matter who draws them. It is very strongly controlled and closed. There it is. You know it is a Sol LeWitt. They can either be drawings described in terms of some kind of geometric configuration or in terms of some kind of athletic thing: as many vertical lines or pencil strokes as you can make in a minute or three minutes and ten seconds. It doesn't matter. The whole point of the piece is that it is entirely encoded in the instructions.

Take on the other extreme a much more open notation: David Tutor's Rainforest. In that piece the basic concept is the transformation of a found object into a loudspeaker. The realizer's job is to find an interesting object and then provide it with sounds that bring out its interesting sonic characteristics. It is a project that confuses sculpture and music in a nice way, and very naturally creates a large-scale group activity that can be developed separately and then brought together, like a potluck. Here is complete room for individual invention in arriving at an appropriate object, arriving at the sound material for the object. But invention is constrained by a premise that is simple enough and strong enough to unify many separate realizations. This is a piece that has a continuum of authorship from Tudor to the performers to the objects.

I don't think the possibilities of notation/realisation should be seen as a replacement for current work, but as a useful supplement. As a practical possibility, I imagine a festival in two stages. The first stage would be an open call for notations. These would be made publicly available on the WWW, a library of 'open sources'. Then individual wishing to get a 'gig' in the festival would need to propose to realise somebody else's notation. The festival would create a kind of market, not for media artworks, but for ideas and projects that could and should be constituted or re-constituted by others.

JB: What do we do in the future with describing these works? Are we going to just keep describing the notations, or will we describe the realisations, or will the works of artists that make actions without notations be the utter form of originality? Do we still need to mention those that initiate the notation, or do we only mention those that made these specific notations famous with their actions?

RK: What happens there is that you get a kind of accretion of a cultural outlet. For example Nam June Paik’s 'Zen for head' has been written up many times. Sometimes it is not entirely clear that it was a realisation of a Lamonte Young's composition no 10 for Robert Morris. Sometimes that is made very clear. I think the point is: the minute you maintain a strict author model as opposed to a more flexible sense of shared authorship you end up getting into issues around intellectual property and back catalogue. The most effective means of resistance to any kind of set piece in cultural practice is to proliferate: to create many possibilities where before there were only a few imagined. This comes right out of the book of resistant practices in terms of sexuality or in terms of politics. I am just suggesting that we should actively embrace the variety of modes of authorship that are possible and incorporate them into our conception of art making.

Of course, this already exists. Miles Davis is credited as a kind of composer, given a special status in the creation of "Bitches' Brew", when this was a bunch of group improvisations he edited together. The reason he is given that status is because the players, the other musicians who are working with him, felt that he was giving a kind of creative direction that warranted that respect. So here there is a complex exchange between Miles and the other musicians that stabilized Miles' identity as the 'author'.

RK: It is confusing. Of course, there are the people who 'become history' and people who don't. I was just thinking of Anthony Braxton, who commented to me: "If you look at the masters, John Cage, Karlheinz Stockhausen, you'll see they are -very- careful about their documentation." He was giving me some flinty eyed practical advice of the form: look buddy, if you don't shape your exoskeleton, nobody else will and you will disappear. The notation/realisation model I am talking about does not alter that reality, but it may make room for a more varied collection of 'culturally intelligible' makers.

RK: If the idea has legs. At least it creates more of a possibility for that. For example when you look at web art. There is a certain kind of superficial political claim that because the WWW is nominally a site of free information exchange sites based on appropriating from other sites are 'making sure' that is the case. The problem is that appropriation is at least in part a form of virtuoso consumption. The complementary problem is that just about any act of 'creation' just becomes more ‘Web’. That is the genius of the web: it flattens distinctions. What may be interesting about notation/realisation on the Web is that a simple verbal injunction could act as the 'source code' for a page or site. There is an encoding/decoding process that goes on there. You see this in relation to the specific simple constraint. Then your relationship is not one of shopping on the web for something equally diverting, the relationship is between an idea and a realisation. I don't make web pages, and I certainly do not do web art. I offer that up more as a starting point for a conversation then a claim of fact. I think it is a conversation that is worth having. I suspect the conversation is worth realising.