After following the development of art and culture in the context of the Internet since 1993 I am still fascinated: there seems to be no end to the sometimes surprising transformations in art and art criticism in this ever expanding field. The boundaries between media art and contemporary art, if they ever existed, are dissolving. Let's enjoy this moment together. 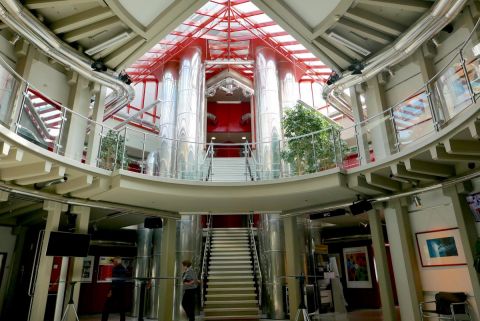 The hall of the ORF studio in Linz, a design by architect Gustav Peichl in 1972, where the original The World in 24 Hours by Robert Adrian took place. The first Ars Electronica festivals also took place in this building, namely in one of its live TV studios.

It is time for a long overdue update! Since mid 2017 I am working on a research project around the work of the late Robert Adrian, an artist who was one of the biggest influences in my life as an art critic and theorist. Adrian's work firmly shaped how I see art in the context of the internet. This research project still takes up most of my time and will do so for at least one more year. Part of it namely is a re-envisioning of Adrian's famous work The World in 24 Hours, a re-enactment of Adrian's vision with the original work, which should take place at the Ars Electronica festival in September 2019. This will be a collaboration with artist, curator and theorist Patrick Lichty. Next year is the 40th birthday of this huge electronic art festival, where The world in 24 Hours took place in 1982. In the past year I have been in touch with numerous of the original participants and other important actors behind the work, such as Adrian's friend and collaborator Bill Bartlett and computer ingeneer Robert Bernecky of IP Sharp, the network that hosted part of the performance. For next year's event at Ars Electronica festival the prospects are amazing! I cannot tell you more at this time since everything is now under construction, but updates on the shape and content of the event will probably be more clear next spring. Next to this I have curated an event in the Come Closer series at the Christian Boltanski expo in the Oude Kerk in Amsterdam in Februari this year. A month later I was part of the Netbased Award at the Haus für Elektronische Künste (HeK) in Basel, where Olia Lialina won first prize with a lovely and smart work, Self Portrait. The work is a beautiful integration of simplicity in appearance and complexity in form: Lialina's portrait can only be seen in full glory when opening it in three different web browsers, one of which is the anonymous browser Tor. In the meantime I wrote a text for the upcoming book publication of Rhizome's Net Art Anthology. Other things are still in the pipeline. A nice event that will happen soon (November 5th) is Cogito in Space by Daniela de Paulis, which includes a mini-symposium I will be moderating. The event takes place at the radio observatory in Dwingeloo, where De Paulis will do a performance in which she sends EEG data of the audience into space.